Post here if you want to discuss a topic specific to the PDQ Altair.
Post Reply
7 posts • Page 1 of 1

After a vigorous sail to windward yesterday, we found a significant amount of water where it shouldn't be. 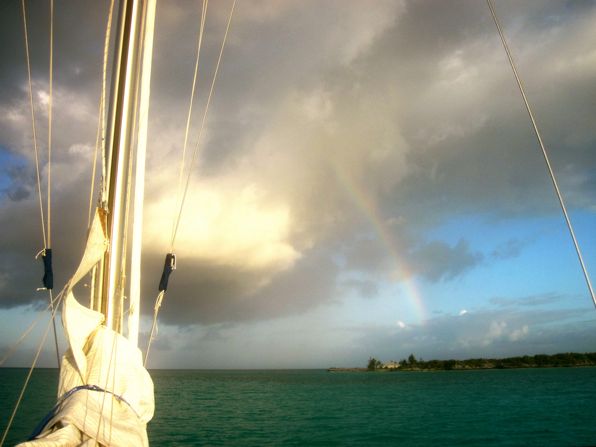 I don't know how water got into the bow. We have had water in there twice (fresh water leak in water heater feed, leaky through-hull). I've never had measurable amounts come through the windlass and it has been plenty wet (regular leakage should go out the anchor well drain; is it clogged?). The shower pump discharge should have a check valve, located above the discharge in the bow compratment. The hose should be routed high, clear to the underside of the deck, to help prevent backflow.

I'm guessing the water in the bilge came from the bow leak. I would start by really drying the bow and looking for small leaks (that are bigger when the boat is working hard). Not a fun place to work, as you know. Also, re-seal the hose pass-throughs.
Writing full time since 2014.
"Rigging Modern Anchors,"Seaworthy Press, https://www.amazon.com/Rigging-Modern-A ... 1948494078
Book Store. http://sail-delmarva.blogspot.com/2017/ ... store.html
Top

A few more questions I forgot to answer (been traveling on business all week).

Yes, I fought leaks for a while. I can tell you this; she's tight now, all fixed. But we had our times. Let's see...
* Leaky speedo (several months--replaced o-ring and Vaselined it).
* Overfilled water tank (once).
* Left the lid off the water tank (once).
* Cheap freshwater strainer broke (once).
* Took 8' breaker over the boat. Once!
* Leaky fresh water piping for a year.
I promise you, the PDQ is MUCH harder to sink than most monohulls!
Writing full time since 2014.
"Rigging Modern Anchors,"Seaworthy Press, https://www.amazon.com/Rigging-Modern-A ... 1948494078
Book Store. http://sail-delmarva.blogspot.com/2017/ ... store.html
Top

I regularily had water come in through the shower drain until I bought some hose and routed the exit in a high loop. This cleared up the issue.

1. A rag was stuck in the bow compartment drain hole. With the water we were taking over the bow I have little doubt that without a place for it to drain out, it could have accounted for the water by the through-hulls.
2. There is no leak in that area (transducers/through-hulls) as after drying it out, it has stayed bone dry for the last two days.
3. There is zero water in the sealed crash compartment.
4. After disassembling the sump pump, checking every hose and part and then reassembling it, it now works. No idea why. It may be as Drew suggested and just wasn't able to prime.
5. The water in the bow was not high enough to leak around the head hoses. I still believe that the water in the bilge came from the shower sump exit. There is NO loop in both the holding tank vent hose and the shower sump exit hose. I will be fixing both of those, adding more hose to make a nice high loop.
http://www.zerotocruising.com
Top

The missing loop in the shower sounds at least plausible; the loop in my boat appears to have been installed by the PO, presumably for that reason. Also, if you add a check valve (mine has one) remember the swing-checks must be installed either flowing upwards or horizontal; pointing down they simply hang open. Spring checks are not recommended in waste lines; they clog.
Writing full time since 2014.
"Rigging Modern Anchors,"Seaworthy Press, https://www.amazon.com/Rigging-Modern-A ... 1948494078
Book Store. http://sail-delmarva.blogspot.com/2017/ ... store.html
Top

This is an old thread but I found it when searching for something else and there is a some very useful information here very specific to the 32, so I thought I would post here.

I cleaned up the threads on the inspection port and cap, and replaced the gasket and the leak is gone. I also am more careful in not overflowing the water tank when filling it.

I might take a closer look at the shower sump in light of the loop/check valve issues brought up here.
--
Top
Post Reply
7 posts • Page 1 of 1