Post here if you want to discuss a topic specific to the PDQ Capella.
Post Reply
16 posts

Hi all, Would appreciate some ideas from those of you who have electric heads. Is there one that fits well and doesn't take up to much room in front of the sink? Should they be mounted diagonally? We have a full-size Jabsco now which works fine for me but is a royal pain in the arse for my wife (doesn't care for the pump action). Looking for a good fit, low maintenance electric head guys, what say you?

we have an jabsco electric head. not sure of the model but i can get it.

i hate it. the design has a seal between intake water and exhaust water which leaks exhaust into intake unless adjusted just right (good luck with that).
john & diane cummings
duetto mv34 #23
Top

Thanks John, that must be the 37010 model that I was considering, good to know!
Top

I recently had a conversion kit installed to remove the hand pump and put in a macerator pump. Works great so far. Running the wire for the electrical connection was a pain but worked. i did it for the same reason - the wife didn't like the hand pump.....
Jim B
Main Event II
Panama City Beach, FL
Top

Thx Jim,
I've not read or heard of good reviews on the Jabsco conversion, currently looking at the Raritan Sea Era.
Top

Jim,
Just curious, where did you mount the switch?
Top

I don't know if they're still available, but we had 17 trouble free years from our Lavac.
Marc
Top

I've measured carefully and am almost certain it will fit on the raised area in the head, if it is installed facing aft. Also, I've seen photos from a sale listing that show such an installation of an unspecified model Raritan electric head:

I plan to try to do the install this weekend. I can let you know how it goes. I've considered installing it facing at a slight angle, so we're not so pressed up against the wall when sitting on it, but there's only room to rotate it about 5 degrees...

Rob,
I've been putting off the electric conversion mainly because I just replaced the compact bowl two years ago to the regular size and honestly have no qualms with the manual pump. I know I'm gonna lose this battle though and am procrastinating like crazy. Having the bowl facing aft seems like a stretch to me. Looking at the pics it just appears awkward. I would be interested in seeing how far you could place it diagonally toward the vanity and it still fit on the pedestal.
Best, Jim
Top

We didn't finish the install this weekend, but I did try out different ways to place the Marine Elegance, and it has to go straight back. There is no room at all to angle it. In fact, the left edge hangs off a very small amount. I guess my measurements were a bit off. On the plus side, there is more room than I expected between the edge of the seat and the wall. However, due to the way the wall curves in towards the shower door, I expect we will end up sitting on it at a slight angle. I'll post pictures (sans occupant) after we finish the install.

Whew. Finally finished the install. It was a PITA! (Notes/advice below)

Here's the finished product (but before complete cleanup): 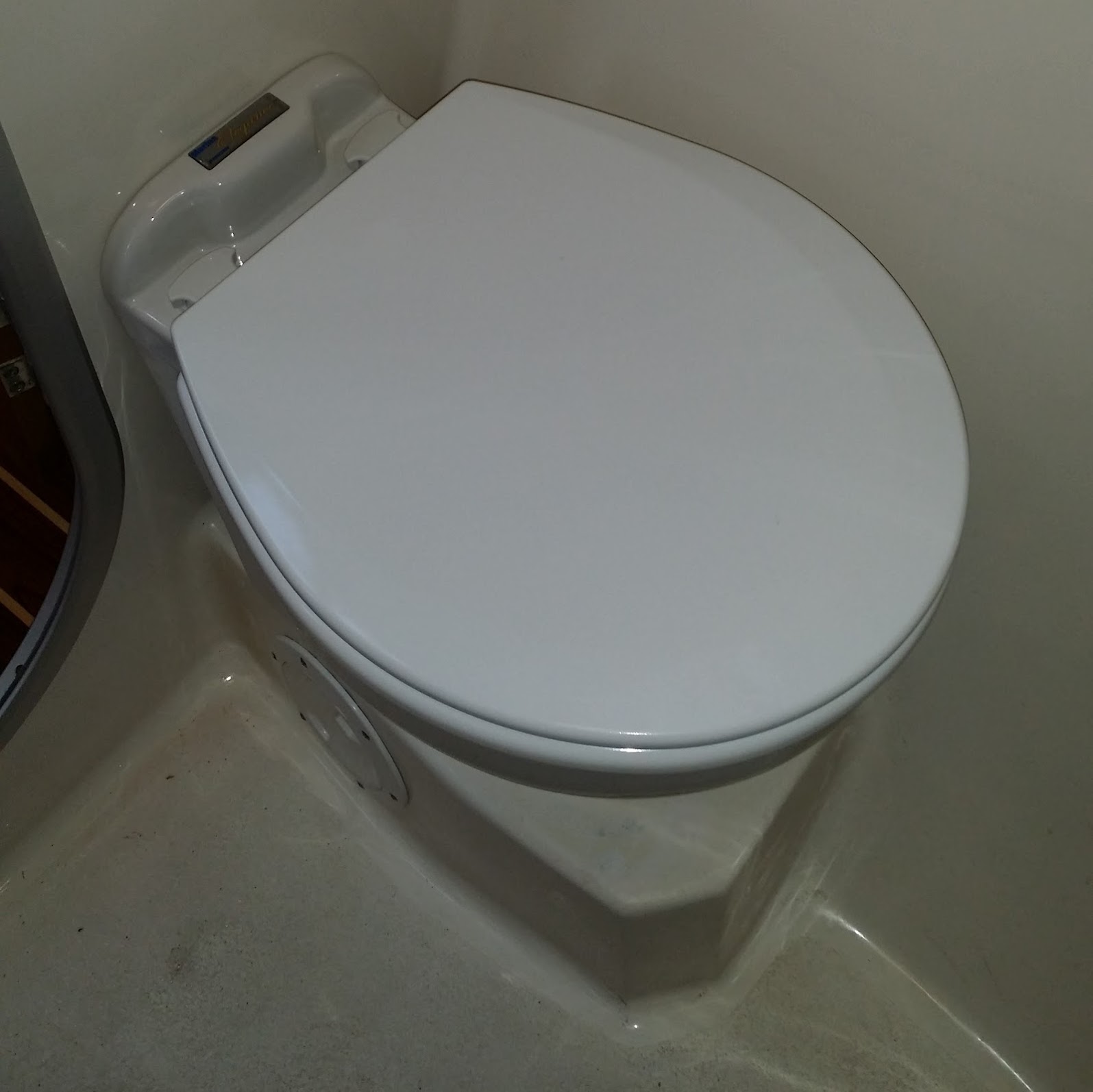 It hangs over the edge of the pedestal a small amount: 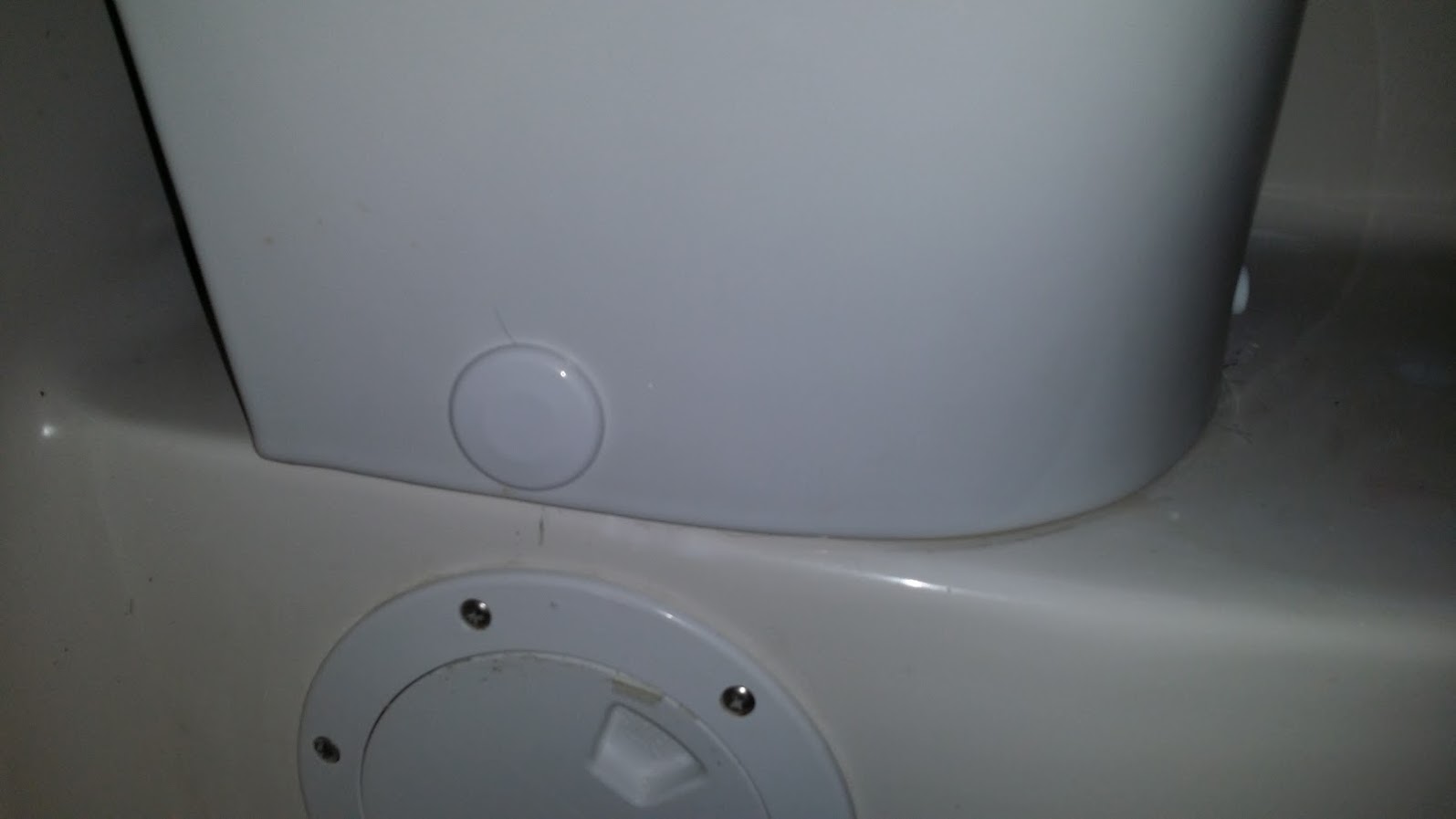 I have to sit on it at an angle, but I'm relatively thin so I can make it work. It's actually kind of nice, since that leaves you securely pressed into the corner. I haven't tried it "for real" yet, though.

- Removed old toilet, glassed over inlet and discharge holes, and drilled new holes for inlet, discharge and electric. I chamfered the old holes and filled them with wooden plugs glued in using West system epoxy with fiber fill. Then glassed over the plugs to rebuild a smooth surface. It sanded out a lot, so I ended up putting in like 10 layers of glass. I filled in the old screw holes using marinetex putty, but would've just used West epoxy if I'd had it at that time. 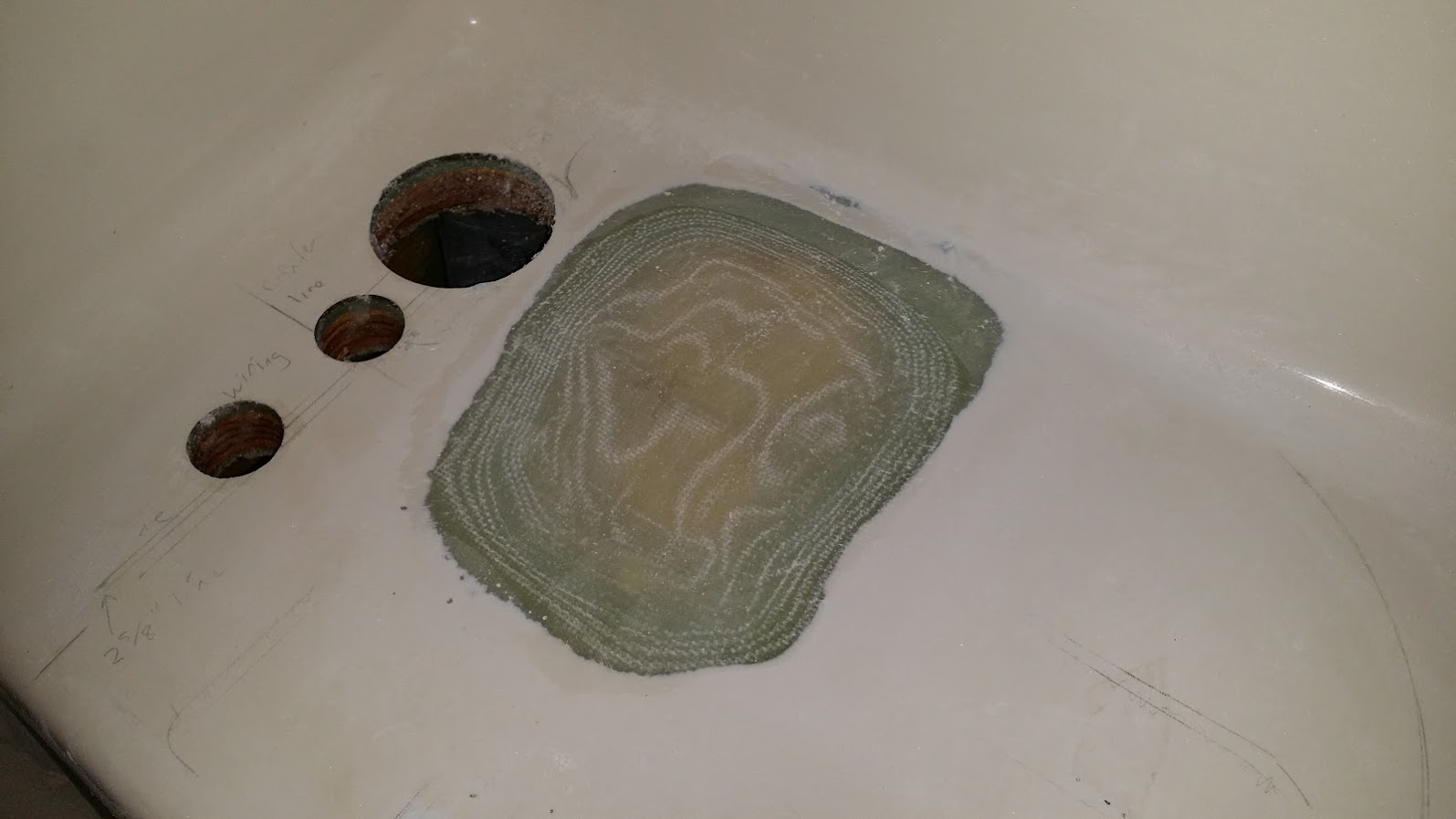 - Another problem with the mounting brackets is that they screw into the toilet from the side. Since the toilet faces aft and is right up against the wall, there is no access to the bracket on the left side of the toilet. As far as I can tell it is impossible to mount using the recommended procedure. I solved this as follows. I removed that bracket from the mounting guide and attached a bolt to the bracket. I then attached the bracket (with the bolt pointing down) to the toilet. I drilled a hole in the floor for the bolt. I then put the toilet down so the bolt goes through the hole and then use a nut and washer to bolt the bracket down from inside the access port. I only did this for the problematic bracket.

- Also, the recommended positions for the holes for inlet, discharge and electric were way off. (This could be because the positions are specified relative to the brackets, which were off). If I'd followed the manual's measurements, the discharge hose would have come out of the floor under the mascerator pump. I moved them all back about 1/4" inch and everything worked fine.

The rest of the install went relatively smoothly. I got the smart toilet control which has a control box that must be mounted somewhere out of sight. I epoxied a mounting block to the hull under the sink counter, attached the control box, and ran the wires from the toilet to the control box inside a plastic hose under the bathroom floor. I mounted the control interface near the electrical outlet, where my toilet paper holder used to be. I then installed a new 25 amp breaker in the panel and wired it to the control box.

I added a tee to the cold water under the sink and ran the new hose under the floor. I added a manual valve to shut off the toilet inlet if necessary. The valve is under the pedestal, accessible through the access port. I also added a backflow preventer near the tee, as an extra precaution.

That's my report. Hope it helps.

Paula and I are thinking of replacing our head with "something better" and we are enthralled with your project. However, we cannot see the images you posted and, as our boats are identical in construction, images of your hard work is important to us. How can we make those images visible on our computer? Regards, Ray & Paula, Wind Seeker, PDQ 3695.
Top

Nice report Rob, sounds like it was a bear to install. Also not able to see the pics, would love to see them, maybe use another format.
Top

A little late in the thread, but I recommend considering a Lavac. We had two of these serving 7 people for two years on a daily basis and had minimal problems. The benefits are that they are the definition of simplicity, and rely on a diaphragm pump as opposed to a spinning blade, and you can put an electric pump in series with a manual pump so you have a backup. Any electrical pump will fail at some point so you need spares of a backup system. Or both.

Also, the diaphragm pump is versatile. I will mount in on the bulkhead behind the head, and with a couple valves I can set the system for direct overboard discharge, discharge into the holding tank, and use the same pump to pump out the holding tank (and even use it as the shower sump pump if you wanted to add another valve).

Many cruisers swear by Lavacs; I'm one of them. The basic Lavac with a manual pump is about $450. http://www.lavac.com/ You can find an electric diaphragm pump for about $165-240, depending on which brand you choose.
Top

I think I've fixed the pictures now. Please let me know if not. Sorry about that.