PDQ issues applicable across all PDQ Yachts (or if you can't find a place for something, it probably belongs here for now)
Post Reply
11 posts • Page 1 of 1

Yup I searched the old threads. However, I wanted to go a bit deeper. I am replacing the main on a PDQ 32. While I'm not into racing, I'm probably more interested in speed than most, something left over from my fast-boat days. Also I like cruising far in a day, and it helps. 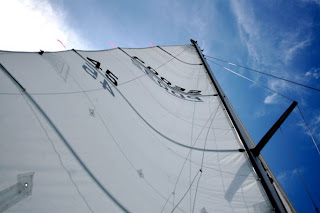 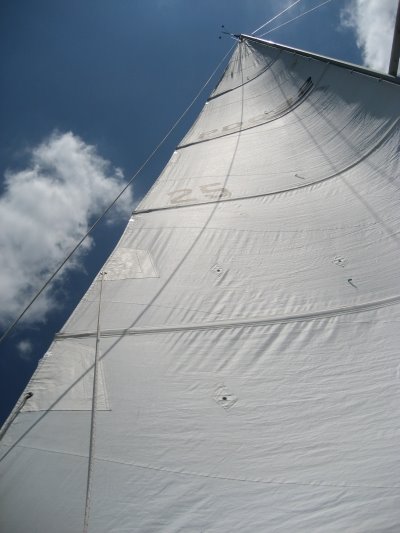 My current sail had a bad S-bend from the start. I stiffened the battens, which helped a good bit. It virtually solves the problems in winds less than 8 knots. But when it pipes up the leach falls away something pitiful. I could recut the thing--I've done that myself on a number of sail--but in this case it is both a stretched leach and belly, so she's done. I've seen a lot of s-shaped leaches on PDQs and so I want to avoid that path. Though I like to spread as few dollars as far as possible, I'm not chasing the lowest price on this.

* Materials. I know I'm not going to carefully flake the sail each time, so I'm a little skittish around laminates. However, I would accept something proven with cruisers. Or is there an asymmetric woven fabric that will work better? Or do I just go up one weight (I'm assuming it is 6 ounce and I could go to 8 ounce)?
* Roach and square tops. Though I understand the aerodynamics, I thing think the practicality does not suit me. I don't want to be fooling with releasing either battens or lines at the head. I don't want batten cars; my slides work great and I like the simplicity. Though I wouldn't mind more area, if the only options are a square head or more roach (the PDQs already carry too much area aft of the mast) I will stay with what I have. Efficient sails generally beat large sails around the course.
* Boom height. I really got clipped hard a few months ago when a guest helmsman allowed an unplanned jibe. Fortunate it hit me on the forehead and caused far more noise than harm, it was a real eye-opener (nearly an eye-closer!). In 30 years of sailing that is the first time I've been tagged. And then I got a minor bang a few weeks ago, though in that case it was largely because I had a pulled back muscle and was moving poorly--it was far less severe. Also, depending on the sheeting, the boom sometimes catches on the solar panel frame. It is also impossible to get the sail cover on properly. Anyway, I'm thinking of raising the boom (not the gooseneck, only the boom) about 6 inches. The loss in sail area would be trivial.
* Reefs. Certainly I'm going to add a 3rd reef. I reef the main early for balance, always before the jib, so I am often sailing with 2 reefs and a full genoa off the wind when it gets up over 20 knots. She just handles better. Though I only sail in higher winds occasionally, I can imagine that 3 reefs and working jib or partial Genoa will balance well. Or would it make more sense to move the reef percentages up, since there are only 2 internal reefs? Perhaps take #1 to 1.25 and #2 to 2.5. Something like that. Or I may not change the spacing and just add a 3rd set of points.
* Loose foot. I can't flatten the bottom on the current sail with the outhaul, resulting in a lot of back wind. Unless I'm given a convincing reason, I'm going loose foot. I've had them before and like them better. Then I'll have to figure out a convinient tackle for adjust in the foot tension from the cockpit (I'll probably settle for placing the tackle on the aft end of the boom, though it might be as simple to lead it to a port side winch or even a mast winch to start).
Writing full time since 2014.
"Rigging Modern Anchors,"Seaworthy Press, https://www.amazon.com/Rigging-Modern-A ... 1948494078
Book Store. http://sail-delmarva.blogspot.com/2017/ ... store.html
Top

You battens still look too light. I replaced mine and I no longer have the S curve. Tightening the leech line also helps.

I agree with the move to a loose foot. I had a loose foot on a previous boat and it allowed much better tuning. That will be my choice on my main replacement.

Doubledutch, I hear you, but I know sails, have designed them from scratch, and this is beyond simple fixes. The cloth is stretched beyond simple help.

* The battens were stiffened with carbon fiber, but there are limits. In lighter winds that straightens the leach, but when pressed the leach still falls off since there is no shape in the cloth to provide support.

* When the wind is light the sail is too full; when it blows harder it's really a bag.

* I can tighten the leach line but the then the leach is too tight and the sail even more full for windward work. You also get some leach hook up high and down low. There is some tension on the leach line in the after photo.

By the time I adjust the traveler and sheet for the correct exit, the belly is into the slot.

OK, one more vote for loose foot. And thank you for reminding me to add stiff battens to the spec list. I have a minimum stiffness in mind (10# for the lowers and 8# for the uppers, tapered to 4 pounds near the mast).
Writing full time since 2014.
"Rigging Modern Anchors,"Seaworthy Press, https://www.amazon.com/Rigging-Modern-A ... 1948494078
Book Store. http://sail-delmarva.blogspot.com/2017/ ... store.html
Top

You've got more experience than me in fast boats - I've sailed a stiletto three times in the late 1980 and it still pops into my dreams...

But I do know loose foot does better on rigging stress and sail adjustments. The new sails on our 36 are loose foot and work well. So another vote.
I had the Rep from Neil Pryde out, who specializes in multi-hulls and he could not find a way to increase the roach much (he did add 2 inches at the top) due to the split backstay's position.
He recommended against a third reef for me, as the short 'stick' 42' mast on our 36 is basically already at its first reef point when at full sail. (I think yours is taller)
He lifted our boom a degree or two, which allowed me to have James add a boom gallows on the hard top. The improvement of new sails leaves no way to measure the effect, if any from the angle change.

My last boat was a ketch. I sailed often with jib and jigger (mizzen). I noticed more drive from the genoa than the mizzen, primarily from a lee helm. I made the mizzen loose-footed, and the lee helm was gone, speed increased, and balanced better. I'm a believer.
Having said that, I still have my foot on the main on the PDQ still attached. Part of the reason is it holds my stack pack in place.

Dave Calvert in the Florida Keys built the sails on Page 83. He has been building racing sails for Stilettos for years, and has earned a wicked reputation on his "Bare Naked 42". But the bulk of his output has been for high performance cruising cats. He is not cheap. I spec'ed a loose footed main and easy bag, and when I lower the main I just let the halyard go, and it drops into the bag very prettily.
John Balano at Doyle Chesapeake Sails built a new genoa for the Atlantic 42, and it's a thing of great beauty. They changed the name of the shop last year and I can't remember the new name. Their telephone was (410) 263-4840 but there wasn't an answer today (Monday Oct. 7) They could be out setting up for the Boat Show. John loves racing, but on a very old wooden schooner!
Sandy Daugherty "Page 83" PDQ 36026
Top

Hello David Slater here owner of 3697 I have had great success with the kevlar /mylar mainsail on Delphine holds it shape well in strong winds and provides good performance in light . With one reef in it still performs well in quite strong winds . it has a shelf in foot made of light dacron a feature I like . If you have a Seldan boom you should be able to do the out haul. does yours go to a winch? If your sails are tired and have a belly you may feel that the main is to big ,but a fresh set that pulls instead of drags could change that, On Delphine we go down to the 2 before reefing .Ask the sailmakers which of the high performance cloth they might suggest I think it is worth it
David
ps.only the loaded areas are kevlar
Top

I've ordered a new Dacron main from Mack. I pondered some other cloths but I'd like to see how a better quality main will due, with some improved design features and high aspect cloth. We will see. I fear I would be too careless for Mylar. Interestingly, though I brought up the subject of upgrade cloth ALL of the sail makers talked me away from it.

Yes, you are certainly right about sails sometimes being retired without exploring the vigorous use of adjustments: down haul, outhaul, batten tension or replacement, traveler and mainsheet. Set-and-forget is pretty common. But we're past that. The outhaul works, it just could use a jammer for ease of use; I will probably add this, but I'm going to wait and see how it behaves first. It's a simple fix I should have done years ago. My current sail has a conventional foot, but the winch will haul it flat if used firmly.

I have heavy duty leach line on Delphine that goes up to the head ,through some small turning blocks and down the the tack .very easy to adjust .you might suggest that to your sail maker .carefull use of the leach line can protect the back end of the sail and stop it from blowing out